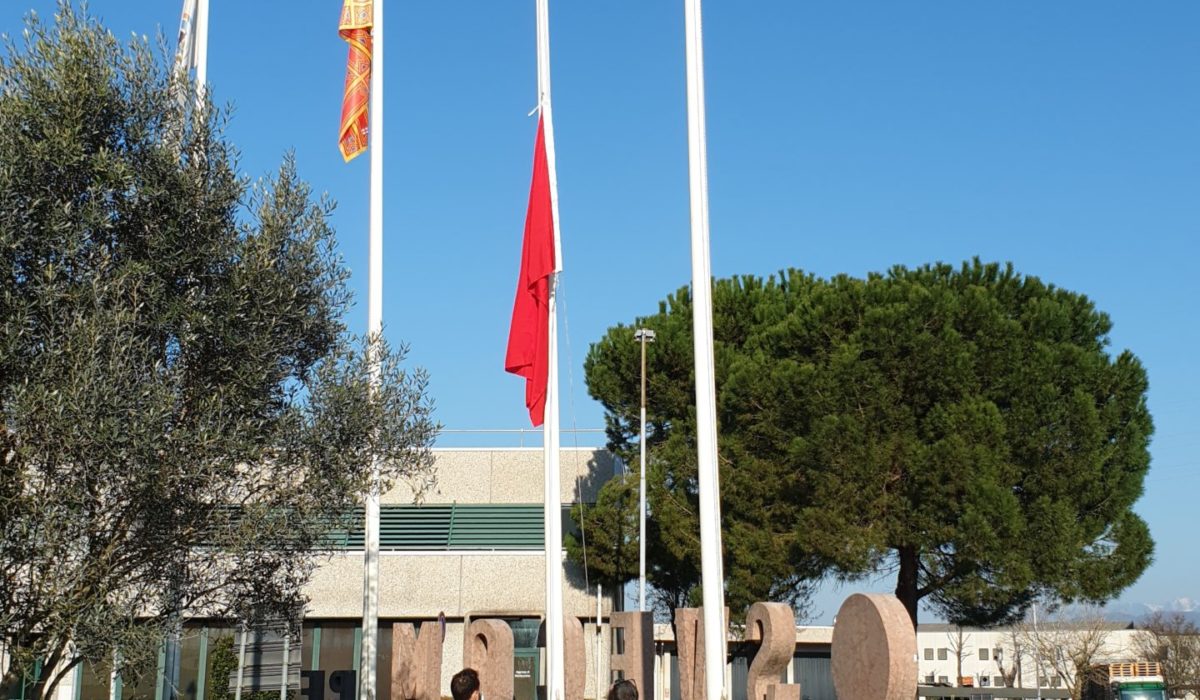 You may have seen it. A picture has recently been making the rounds on social media, showing what looked like an Italian citizen taking down the European flag, and replacing it with the flag of China. This was immediately reposted on numerous websites and social media sites, generating many anti-European comments. Our team has investigated the origins of the story, and found that in fact, the original intention was quite different.

We found this picture posted in news places from different countries of Europe. For example, the Hungarian site vajma.info, officially supported by the Hungarian government,  posted the following:

“The coronavirus pandemic has hit Italy the hardest, and it seems that the European Union has not shown solidarity with the country, but China offered significant help in this difficult situation. Italian citizens also recognized this, and images were posted on social networks in which frustrated Italian citizens can be seen everywhere taking down  the EU flag and replacing it with the  Chinese one.”VAJMA.INFO

Further investigation showed that one of the first communities where this picture emerged was through the Arabic-speaking part of Twitter. Here we can find a tweet by Saana al-inbaria which gives more information about the origin of the photo. In it we can see a reference to the famous Iranian-American writer Wali-Nasr, as well as a mention of the recent conspiracy theory that the coronavirus was manufactured by the United States.

The picture could also be found in twoeggz.com, a Chinese site. For context, this same site accused Poland of stealing 23.000 masks, that were a donation from China to Poland. The site provides no references, nor is this news corroborated by any other site. Furthermore, the Polish Foreign Minister stated on Twitter that it did not happen, and that these were fake news.

At the same time, this picture was quickly posted on a new Facebook page, which attempts to leverage the coronavirus situation to grow its reach. This Facebook page also posts stories from websites linked to online propaganda campaigns, such as Sputnik News.

After an investigation from our team, we were able to identify the source of the picture and its real story.

We were able to locate the place where this photo was taken, and identify the finding it was the company Svecom PE, an established, family-owned technology manufacturing company from Italy, with a long history and strong business ties to Europe. We decided to contact them, to know whether this was official policy from the company or something else.

Unsurprisingly, the company had a different story to tell.

We interviewed Mr. Patrizio Viero, a marketing executive with the company, who told us that company has been disappointed and taken by surprise by the negative spin that online propaganda sites have tried to put on their gesture.

In fact, according to Mr. Flavio Marin, Sales Director and part of the founding family, this was intended as a gesture to thank the countries that had helped Italy in its fight against coronavirus, not as a gesture against the European Union.

The original intention of Svecom was to raise a different flag every week in front of the building. As the flag was changed one of the workers decided to take a photo and posted it on his personal media page with the subtitle of “thank you for your help, China”.

However, online propagandists took this picture from the personal media of the son of the owner, manipulating the image to look like it was an attack against Europe.

This had a lot of impact. The company started immediately to receive many calls from different parts of the world, asking about the picture. This shows how fast a small act can be amplified and get out of hand when driven by online propaganda.

Svecom was hit with a hard backslash caused by the photo. Most people were angry at this act, with the exception of some Chinese people, who called to congratulate the company on their initiative.

Right now, the company hopes for this unwanted attention to go away, and things to return to normal so they can focus on their business. They continue with their plan to replace flags every week. Now, they have replaced the Chinese flag with the Cuban flag.

Will online propagandists try to position this as a gesture against China? Unlikely.

A time for unity

This is not an isolated incident. The act of removing or burning European flags in Italy has started to gain traction recently, with the hashtag #CiSalviamoDaSoli (We Save Ourselves), but no company has supported officially this movement at the moment of writing this article.

While Europe is engulfed in a debate about coronabonds, with Euroscepticism on the rise, and an ongoing tragedy with tens of thousands of lives being lost, online propaganda trolls are finding fertile ground to sow division and mistrust in Europe. Just like this case has shown us, it is important to remain aware of potential online manipulations as Europe continues to face its worst challenge since World War 2.

This div height required for enabling the sticky sidebar